@jalcine Yes, I agree with that; let me clarify why the decentralized currency stuff comes in: it's mainly because I'd love to, on my own software, have it analyze what I'm using a lot and have it help me send money to those projects.

BUT, a barrier to doing that is that current payment systems require working with finnicky mega payment processors, who are liable to ban you for all sorts of things including microdonations because it might look like CC fraud.

This happens everywhere but it's *especially* toxic in FOSS-like communities (where sadly it's also very common!). So much of FOSS is about community building. But what kind of community do you think this kind of behavior builds?

This happens everywhere but it's *especially* toxic in FOSS-like communities (where sadly it's also very common!). So much of FOSS is about community building. But what kind of community do you think this kind of behavior builds?

Snark can be fun, but many people use a rude application of snark as a substitute for clear analysis because contemporary culture treats it as equivalent to being an "intelligence appearance amplifier".

Eg, "The devs were too stupid to even ... " has the hidden implication that "obviously that means I'm smarter than them", even if the analysis is weak. Some people may fall for it, but it might actually just mean that you're being a toxic asshole rather than providing anything constructive.

@jalcine That's all to say I agree, and I feel like the sad state of current economic systems is a contributor :(

@jalcine I think we could do better, but it requires easy and tbqh probably decentralized payment mechanisms that don't have high transaction overhead like most contemporary cryptocrurencies have (there are some better options: ocap style mints, digicash, etc). Right now there are a lot of times where I want to throw money at something but the central players feel like blockers to me.

If paying small players could be easier, I'd pay more.

Who's funding, a quick case study, key steps in figuring out a good project idea, budgeting, hiring, + submitting, & how a new workgroup can help you get going.

I borrowed heavily from Dustin Ingram's CSS that he uses for https://dustingram.com/talks/2020/03/19/static-typing-in-python/ & similar pages displaying talk slides+transcript side-by-side, but on my site it's hard to read on mobile, and I will save that problem for another day.

Unfortunately, as of August 6, 2020, Executive Censorship Orders are now a reality in the United States of America.

This is a reminder that F-Droid.org was built to be an open, censorship-resistant alternative to the Google Play store for Android devices. It's easy to install, and it's an important way to protect your mobile devices against Executive Censorship Orders, for the free & open apps installed from there.

A software developer with an art history degree, you sound like my kind of people! It's good to hear that we've got an audience that's interested in our intersecting studies :)

On a related note, it turns out that the length of our outline is inversely proportional to the length of our episodes. This week we had a minimal outline which turned into a much longer episode than we've put out thus far. The good news is ... hopefully it's fun ;)

This week on @fossandcrafts, @cwebber and I look at the ways people enjoy their hobbies (games/FOSS/crafts) using the framework of the "Eight Kinds of Fun" and MDA!

New episode of @fossandcrafts where @mlemweb and I apply the game design theory of "The Eight Kinds of Fun" to examine the varying things people get out of contributing to FOSS projects and crafting in general: https://fossandcrafts.org/episodes/4-the-eight-kinds-of-fun.html 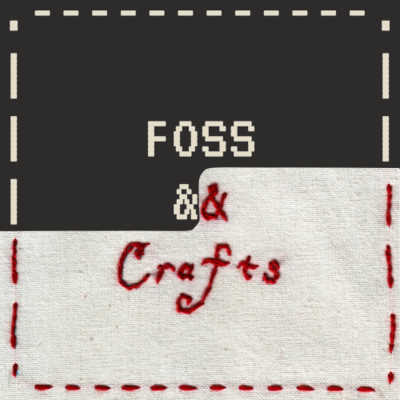 On this episode, we examine how "The Eight Kinds of Fun" (traditionally used for game design) can be used to understand what different participants value from contributing to FOSS communities and crafting https://fossandcrafts.org/episodes/4-the-eight-kinds-of-fun.html

This is provides a clean path towards composing Goblins and GUI programs written in Racket!

I think I know how to make Racket's GUI library compose beautifully with Goblins. Gonna give it a try.

things are getting back on track, almost at my month low... and this week I want to speed past it! https://dustycloud.org/tmp/org_diet_results.html